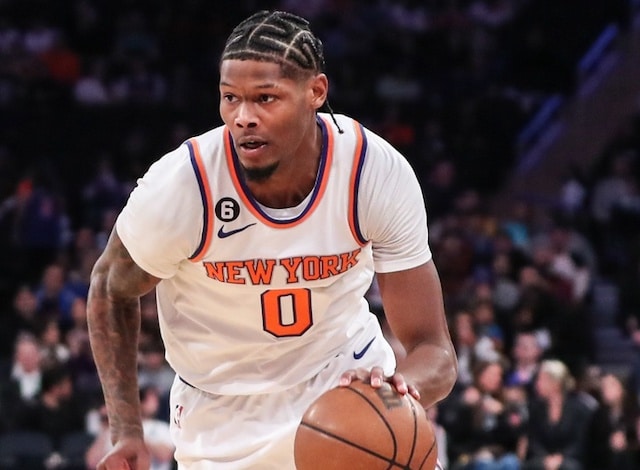 The NBA is officially entering trade season. With the deadline less than one month away, teams are quickly going to open for business to try and improve their franchise’s situation. The New York Knicks and Los Angeles Lakers both figure to be active, with one name — former No. 10 overall pick Cam Reddish — frequently circulating each team’s headlines.

The Lakers have been connected to Reddish for nearly one year, when the Knicks traded for him prior to the 2022 trade deadline. At the time, L.A. was unwilling to deal a first-round pick, his asking price from the Atlanta Hawks. They reportedly offered two second-round picks to Atlanta, but the Knicks ultimately won the bidding war.

The Knicks have made their buyer’s remorse clear, as Reddish has played in just 35 of his 81 games with the team. Reddish was placed back on the proverbial trade block weeks ago, with the Lakers showing immediate interest.

Reportedly, the Knicks are seeking two second-round picks to part ways with Reddish, according to Michael Scotto of HoopsHype:

The Cam Reddish era appears to be nearing an end roughly one year after New York traded a first-round pick to acquire the former Duke standout. Reddish hasn’t played in 18 games and counting for the Knicks as the team looks to find a new home for the former No. 10 overall pick.

The Knicks are willing to part with Reddish for two second-round picks, league sources told HoopsHype. The Lakers, Bucks, and other teams have inquired about the asking price for Reddish, who was shooting a career-high 44.9 percent from the field before being benched, HoopsHype has learned.

On paper, this deal would appear to be a slam dunk for all parties. The Knicks are reportedly looking for two second-rounders, the exact same price L.A. was willing to pay last season to Atlanta.

The Lakers are also in desperate need of quality wing depth. Of course, Reddish is far from a perfect player, but he fits the archetype of what L.A. could use. He’s 6’8″ and plays strong defense, although the offensive and shooting numbers have been poor for most of his career thus far.

And for Reddish, a fresh start with a franchise that clearly wants him may be a game-changer. The Hawks and Knicks both have treated Reddish as a rather disposable piece, and the Lakers have sought after him for too long to give him the same treatment.

In other trade fronts, the Lakers continue to be connected to Detroit Pistons forward Bojan Bogdanovic. The Pistons have been clear in their asking price of a first-round pick, but recent rumors state that the Lakers are unwilling to give an unprotected first-rounder in exchange for the 33-year old sharpshooter.

Have you subscribed to our YouTube channel? It’s the best way to watch player interviews, exclusive coverage from events, participate in live shows, and more!