For years, it seemed Nvidia (NVDA 0.58%) was unstoppable. In fact, in the decade leading up to November 2021, the company grew its revenue by 645%, which in turn drove its stock up more than 8,000%. Then came the economic storm of supply chain disruptions, high inflation, rising interest rates, and the bear market. As a result, Nvidia shares experienced their worst decline in more than 10 years, plunging 53% from their peak.

Yet based on the available evidence, there are great things to come for the semiconductor specialist. Here are three predictions about what to expect from Nvidia in 2023. 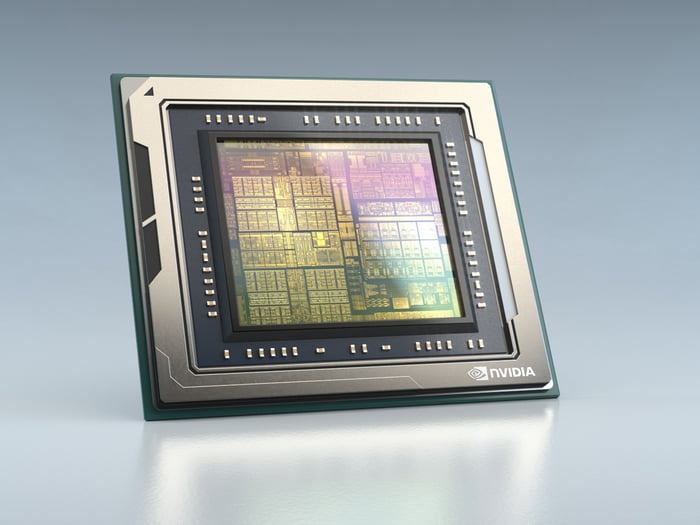 It’s been a tough couple of quarters for Nvidia shareholders and fair-weather investors have been heading for the exits. During the fiscal 2023 third quarter (ended Oct. 30), revenue of $5.9 billion declined 17% year over year, while earnings per share (EPS) of $0.27 plunged 72%.

The culprit? Macroeconomic headwinds have been riding roughshod over consumers. People dealing with decades-high inflation and rising interest rates have become increasingly unsure about what the future holds and are cutting back on spending. Gamers haven’t been immune, with many opting to hang on to their high-end Nvidia chips for just a while longer, at least until the economic outlook improves.

History suggests this will result in pent-up demand. As soon as the economy feels a bit more stable, spending on Nvidia processors should kick into high gear, with gamers opting for the latest and greatest the company has to offer.

Nvidia turned heads last week when it announced a strategic partnership with Taiwan’s Hon Hai Precision Industry, better known as Foxconn. The company is the world’s largest technology manufacturer, best known for assembling Apple‘s iPhones and other devices. Foxconn and Nvidia will collaborate on highly automated and (eventually) self-driving cars. Foxconn will be the original equipment manufacturer (OEM) of electronic control units based on Nvidia’s Drive Orin system-on-a-chip (SoC), while also incorporating Nvidia’s technology into its own upcoming line of electric vehicles (EVs).

The news came just weeks after Nvidia announced a multiyear collaboration with tech titan Microsoft (NASDAQ: MSFT) to build one of the world’s most powerful artificial intelligence (AI) supercomputers. The project will feature Nvidia processors, networking, and software combined with Microsoft’s Azure Cloud.

These announcements illustrate Nvidia’s reputation as the partner to the stars, so expect more high-profile partnerships in the year to come.

The data center segment continues to drive the train

Even as Nvidia’s gaming segment has taken on water during the past couple of quarters, the data center business continues to grow at a pace that belies the troubled economy. In the third quarter, data center revenue of $3.83 billion climbed 31% year over year, even as the gaming unit slumped.

The ongoing digital transformation continues to chug along — even in the midst of economic uncertainty — driven by the increasing adoption of cloud computing. Nvidia is the go-to and top choice for the biggest names in the cloud. Microsoft’s Azure Cloud, Alphabet‘s Google Cloud, and Amazon‘s AWS all rely on Nvidia GPUs to speed their data around the ether — as do a host of other top cloud operators.

This suggests Nvidia’s data center business will remain the company’s principal breadwinner, even after the gaming segment recovers.

Nvidia has had a tough time this year, but a look back suggests its trouble will be fleeting.

What drove these stunning overall results? Record quarterly and fiscal-year revenue in each of Nvidia’s largest segments: gaming, data center, and professional visualization. Profits were even more impressive, with record EPS of $1.18, which skyrocketed 103%. This illustrates just how robust Nvidia’s business was — before the economic headwinds came to bear. This suggests that when things begin to improve — as they no doubt will — Nvidia’s recovery will be both swift and strong.

As I mentioned at the onset, Nvidia stock has fallen roughly 53% from its high reached in late 2021. Yet the company continues to steal share, commanding 88% of the discrete desktop GPU market in the third quarter — its highest level ever.

Furthermore, the company’s valuation is low by historical standards, though it still isn’t cheap in terms of traditional valuation metrics. Nvidia currently sells for 13 times next year’s sales, when a reasonable price-to-sales ratio is generally considered to be between 1 and 2. Still, that’s a small price to pay given the company’s industry-leading position and history of execution.

I’m not really going out on a limb saying Nvidia’s stock price will recover in 2023.